Conservation of Indigenous Breed of Cattle White Sindhan or Thari, an indigenous breed of cattle, is also known as Thar Parkar from the name of the place of its origin, Thar Parkar, a district in Sind. Cows are good milch animals and bulls are strong draught animals. There has been a strong community tradition for breeding and nurturing this breed that was adept at coping with vagaries of drought. However, over the last few decades there has been a gradual decline in the numbers of the Thar Parkar breed. Erosion of traditional management practices, apathy of community, recurrent droughts and uncontrolled inbreeding could be cited as some of the main reasons for the decline of this hardy indigenous breed of cattle.
The focus of the programme has been on breed improvement and breed up-gradation in fifteen villages of Chohtan and Sheo blocks. From the beginning all the stakeholders like breeder associations, village livestock committees, women associations have played a critical role in the programme.
Consistent work with the service providers has facilitated linkages of these livestock committees with the state departments and resource people for animal husbandry and veterinary care.
Work by village Livestock Development Committees (LDC) has been motivating for other farmers. They have taken initiatives to maintain bulls sheds, run bull services, manage fodder distribution and, organizing veterinary health camps. These committees have been of great help in identifying and selecting the breedable stock of the animals. After much persuasion from committee members villagers have been able to recognize the relevance and the need to castrate the bulls and shift them. Farmers from the neighboring villages have expressed their interest in getting associated with the project.
The Thar Parkar breed improvement programme has directly benefitted around 2925 families till the end of 2015. People in the region have got aware about the proper keeping and management of Thar Parkar breed. Special efforts have been done to link women in this project, as they are more involved in animal husbandry. Due to various activities and capacity building of breeders, the expenses on animals have decreased and milk production has increased. There is high demand of Thar Parkar breed in market. 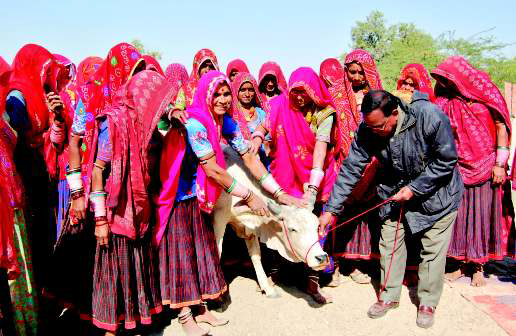 These efforts of SURE in reviving the Thar Parkar breed have contributed in improving livelihoods of people and maintaining an ecological balance in the region.
SURE’s work in breed improvement of Thar Parkar breed is an innovation that has demonstrated the importance of indigenous breed. It has been recognised by the National Dairy Development Board (NDDB) as a model to plan similar interventions for conserving other indigenous breeds of cattle like Rathi in Bikaner.

Dairy Based Livelihoods
Gudamalani region has been known for its traditional dairy business.However problems like unavailability of fair market opportunities,recurrent droughts, exploitative practices of private vendors made it difficult for milk producers to earn sustainable wages from dairy. The region has lacked collective collection centres and most of the communities did not know modern veterinary care and dairy management techniques.
From 2007, with support from Cairn Energy, the SURE team engaged itself with spreading awareness about dairy cooperatives, dairy management and animal husbandry techniques. With continuous efforts at forming dairy societies there are more than 1,812 registered members, with milk collection centers established in all villages. Milk procurement in the last eight years has been more than 71.88 lakh litres and is being sold to the state dairy federation SARAS.
Women play an important role in the dairy business. They have been organized into nine SHGs that have a total of 170 members who had a total savings of Rs. 5,06,579 till December 2014. Many women have been given cattle loans to enable them to link to the dairy centre. 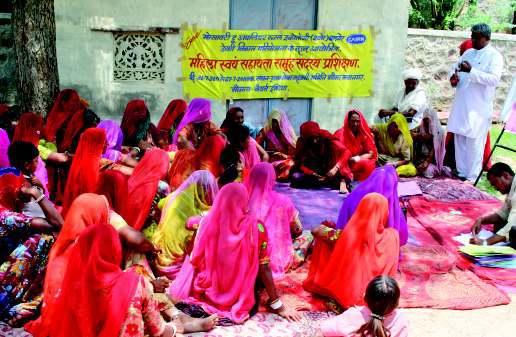 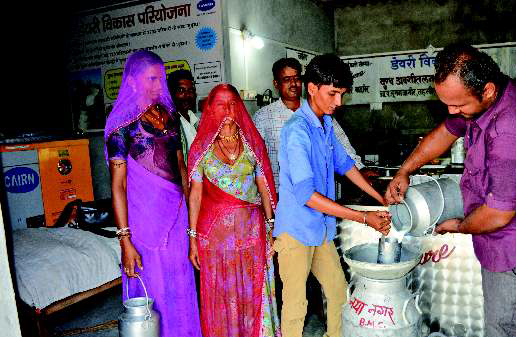 Special focus of the programme has been to empower women from SC/ST communities by giving them leadership roles in village cooperatives. The project also works on issues of short and long term financing of individual and group enterprises, risk aversion through cattle insurance, scholarship schemes for children of dairy members to promote the enterprise of dairying.