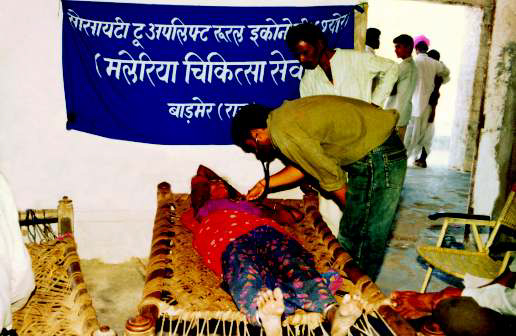 Health care became a distinct sector in the Integrated Rural Development Program of SURE with the support of Action Aid, UK. Focus was on imparting adequate and timely information for empowering communities to engage with issues of public health and demand quality health care services from the Govt. health system. To strengthen the community based primary health care system at the village level, SURE has trained health workers, TBAs and ICDS workers, formed village health committees. 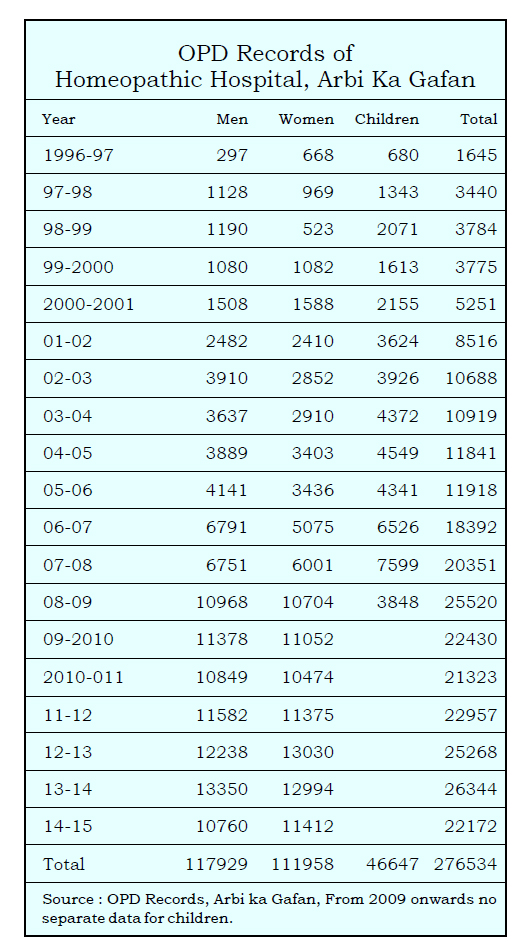 In a vast and desolate region with scattered settlements, access to modern health services was practically unheard of when SURE started working in Chohtan. Most of the village communities relied on traditional systems of medicine which were on the wane. In such a context, when in 1994 a deadly malaria epidemic of the plasmodium falciparium variety wreaked havoc in the region, the extreme vulnerability of people to complexities of health situation in Thar got exposed. SURE volunteers worked day and night to avert deaths and get timely diagnosis and treatment facilities available to people. This overwhelming experience built a foundation for what SURE was to do regarding health care in the years to come.

From 1995 to 1998, KHOJ project was run in eighteen villages of Chohtan block that covered around 2000 families. This was done with the support of Voluntary Health Association of India. Focused awareness programs were done regarding reproductive health. Community health groups were mobilised as pressure groups, to enable people to get benefits of reproductive health schemes of Govt.. The unique contribution of the project was the development of a referral/institutional delivery system which was later adopted by the Govt. in their policy and implementation. The concept of trained traditional birth attendant (Dai) was developed. 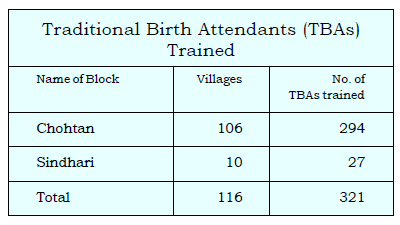 SURE had understood early that a total reliance on allopathic system of medicine was not enough. The team had the benefit of having dedicated Homeopathic doctors, Magraj ji and Kesari Malji who developed a fully equipped Homeopathic Hospital in a remote village called Arbi ki Gafan in 1996. This hospital caters to around 45 settlements around it. Its sustained popularity has demonstrated the efficacy of homeopathy as a viable system of health care, especially for poor in remote areas.

In 2001 SURE was chosen as a nodal agency for participating in a Health and Family Welfare Programme, of the European Commission for 51 Gram Panchayats of Chohtan block. This was an opportunity to work with the health service providers at block and district level to strengthen and improve the quality of health services. Community based pressure groups were made for advocacy to equip CHC and PHC for improved, efficient and affordable health care services.

Over the last two decades, more than 2,50,0000 people in six blocks of Barmer and three blocks of Jaisalmer district have benefitted from different health interventions of SURE.

Development Resource Centre of SURE at Jaipur organizes training, campaigning, counseling of youth in rural and urban areas like Jaipur, Delhi on issues related to life skills, sensitization of urban youth on Gender Based Violence, on Adverse Child Sex Ratio and Combating Sex Selection for Enhancing Dignity of Girl Child. SURE is an active member of Child Health Now (CHN), a global campaign led by World Vision addressing Millennium Development Goals 4 and 5.