Rainfed agro-ecosystem occupies 68 per cent of India’s cultivated area and supports 40% of the human beings and 65% of the livestock population. In the arid context of Barmer, where more than eighty per cent of farmers are small and marginal, focusing on improving conditions for agriculture while conserving fragile ecology of the region has been a priority area from the beginning. From 1992, SURE has been managing the Krishi Vigyan Kendra (KVK), an institution of the Indian Council for Agricultural Research (ICAR), GoI.


The major focus in this district has been livelihood security related programmes for tribal, small and marginal farmers. The programme strategies have included increasing production, productivity and enhancing profitability from existing resources and introducing some economic activities based on local resources. Interventions cover improving production systems of crop, livestock, poultry, processing and value addition. The major clientele have been farmers, farm women and youth for skill development related to the enterprises practiced by them. During the last five years, KVK has conducted on farm trials on 40 technologies, organized 12959 demonstrations on farmers fields, trained 5430 farmers and 1121 extension officials, ensured participation of 1.13 lakh stakeholders in different activities for knowledge and information sharing, produced 1021 tonnes of quality seeds of crops and 7000 number of planting materials.

KVK has changed the scenario of arid horticulture by producing and disseminating seb and gola varieties of ber, in whole district. It has introduced Aonla, Datepalm and Gonda in arid environment with limited irrigation. Gradually aonla and datepalm are becoming popular on desert margins.

More than 649 villages in Barmer district have been reached by KVK for on farm demonstration of technologies and through various programmes. In the last five years supply of 50.35 tonnes seed of Moth, 30.18 Moong, 28.35 Cumin and 25.45 Isabgol demonstrate the demand for the improved germ plasm of field crops developed by the KVK, 12959 farm families adopted sustainable crop production in district through KVK technology. Milk production increased from 15-25% and reproductive problems due to mineral deficiency have been rectified. KVK has organized 300 camps, 25000 ha area has been demonstrated under drip irrigation and 10 pasture development farms have been established in district. The above table presents findings about the adoption rates of technologies disseminated by KVK. The good rates tell us about the enthusiasm of farmers who participate in these trainings. Such trainings have benefitted over a lakh farmers since 1992. The training programs on value addition to indigenous plants and livestock products are very popular among rural women. Training programme on raising ‘mushroom’ using local plant waste material is also Society to Uplift Rural Economy, Barmer Programmes 13 becoming popular among rural women. Value addition and post harvest processing of farm produce are being popularized among farm women for generation of additional income.

The objectives of the Bio - Integration of Farming Activities and Resource Management (BIOFARM) were to develop bio-intensive model farms and/or farm clusters through participatory research based on agro-ecosystem principles and ensure nutritional and livelihood security of resource poor small/medium households. The project achieved food and nutritional security while enhancing productivity of crops and increasing biodiversity. The founding principle of the project was maximum use of solar energy. At the end of the completion of the three year cycle, the BIO FARM project was able to demonstrate the advantages of an integrated resource flow. The project was helpful in identification of the importance of combined use of improved crop production technologies, sowing of improved varieties, composting, adoption of water harvesting technique and pitcher farming method of irrigation for better and ecologically sustainable results from farm produce. Establishment of arid fruit orchard, post-harvest management, nurtritional garden, pastureland development with sewan (Lasiurus Sindicus) and Dhaman (Cenchrus Setigerus), UMB and mineral mixture feeding and other income generation activities like gum farming, top working in desi ber, handicraft production have to be promoted for getting sustainable production and to cope with crisis of traditional farming.

In an arid region, natural grasslands and pastures are of great significance for sustaining the ecological balance as well as security nets for poor and landless in the villages. Barmer and Jaisalmer regions are endowed with a number of bountiful orans (sacred groves) that need to be protected and regenerated. SURE has been advocating for a policy for protection and conservation of these orans and other issues related to pastureland and fodder production in a region where the importance of livestock rearing is still critical. Facilitating communities on issues relating to protection of bio diversity and forest wealth has been a sustained focus of SURE. 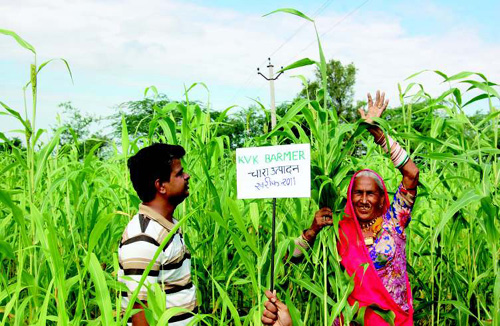 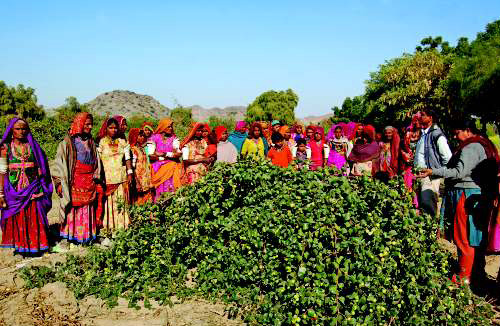 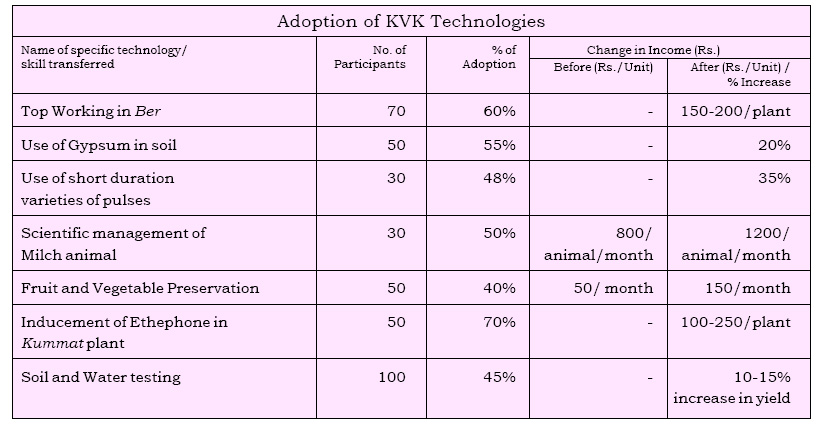 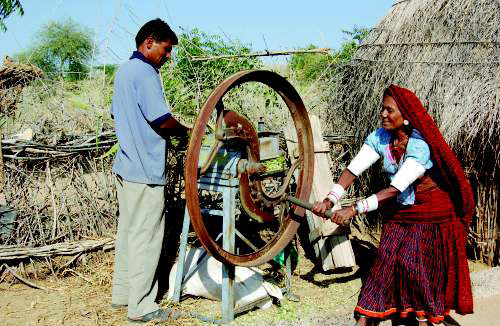 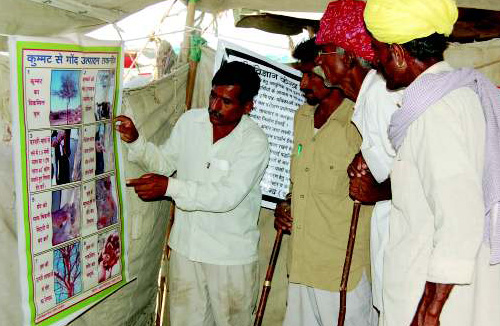 Unfavourable weather condition, arid soils with poor fertility and salinity content, lack of availability of seeds, agronomic and plant protection constraints, lack of proper water harvesting technology, deficient market infrastructure and facilities, scattered settlements, lack of adequate electricity for farm, negligible credit support.One of the important task of the KVK has been to develop improved varieties of crops. RMO-40 is one such variety of Moth (a pulse) pioneered by KVK that has a higher yield and is ready for harvesting in just sixty days. This variety was developed in 1995. After that many new improved varieties have been developed like 435, 223, 257. These have been immensely popular in the region and have been adopted on a large scale by farmers all over western Rajasthan. Besides this, KVK has developed other high yield varieties of pulses, food crops and cash crops. 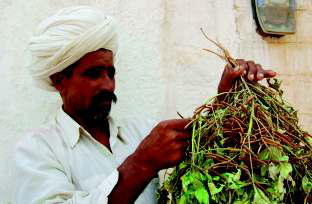